History of the Band

Banding was late arriving in Bagshot, coming at the end of what is generally regarded as the golden age of Concert Bands 1860-1900. The Band was founded by Messrs Chapman & Hickox. The Band first met and was accommodated in The Institute in 1898. As was practice with some 750 other institute bands up and down the country in the second half of the last century, it incorporated Institute in its name and became The Bagshot Institute band. HRH The Duke of Connaught became the Patron of the Band and up to the Second World War, he and his successor made a donation every year.

The first Bandmaster was Mr W L Allen, RM College Band Sergeant, residing in Camberley. He was in the post for 16 years. It is recorded that he could play any of the band instruments. He wrote scales and simple tunes in chalk on the blackboard at The Institute and wrote all of the first tunes played by the Band. He also gave tuition at his home to his leading players.

An early engagement was at Frimley Park for Squire Spens. There was a special request for a certain tune for which the Band did not have the music. Mr Allen hastily wrote out ‘a skeleton part’ for each instrument. The Band went off to practice the piece, came back and played it. It was a bit of a shambles; Mr Allen beating time with his walking stick and the drummers playing even louder to drown he din from the rest of the Band. Small wonder that the squire objected to the fee of £7-10s asked at the end but, probably having seen Mr. Allen’s skill with the walking stick, he paid up.

In these early days some of the Band used to practice scales in the local gravel pit and marching in the local lanes. They occasionally played at night and in the absence of street lighting, they used shoulder mounted oil lamps. These lamps were just powerful enough to see the music but not enough to light the way. It was recorded ‘When marching through the street we turned to go up Church Road and suddenly found Lady Elphendone’s pair of horses on their hind legs in front of us.’

In 1914 the Band disbanded, some presumably going off to war. In 1919 Mr W T Prosser (Musical Instructor at the Shaftsbury Boys Home) took over as Band Master and the Band continued to serve the community as before.

The Band appeared in various locations on Marching Engagements as far afield as Fleet, Farnborough, West End. Chobham, Frimley and Ascot, usually being transported by horse and coach.

Some time after The Great War the Band left the Institute and used a room in an old house. At the same time they dropped ‘Institute’ and became ‘The Bagshot Brass and Reed Band’.

A committee meeting was held on 9 December 1940. The minutes were signed on 1 December 1947 without mention of the war. Typical raffle prizes recorded at the time were 5 cwt of coal and a leg of pork. Between the wars the band used to play carols on Christmas morning but this practice was discontinued during the war. However, a lone euphonium player insisted on keeping up the tradition and he played carols solo.

At an AGM on 10 November 1949 the Brass and Reed title was dropped officially and the Band formally became Bagshot Band.

In 1951 an old member, Mr Soan, offered the Band a hut if land could be found upon which to put it. A lease was taken on British Legion land in Guildford Road and the hut was constructed. However costs, rates and maintenance brought the Band to it’s knees. The desperate straits continued and in 1957 a suggestion was made that females be accepted for membership. This must have been seriously considered because in 1961 they were advertising for players ‘of both sexes’.

The British Legion were selling off some land and asked Bagshot band to find another site for their hut. After much searching it was accepted that no land was forthcoming and the Band returned to the Methodist Hall.

In 1971 it was formally announced that ‘we are no longer a marching band’.

In 1978 the Band played at the Bagshot Carnival on the back of a coal lorry. As it was raining the Band played ‘Sussex by the Sea’ continuously as it was the only piece on waterproof card. On another occasion the Band played on top of an open bus with very little room between the seats. The trombone players had to sit sideways, slides outwards.

Although in the early days the Band was limited in range to what a horse could cover there and back in a day, of late there have been no such inhibitions and we have on occasions traveled to more distant parts eg Exbury Gardens in the New Forest, Calor Gas celebrations at Sunbury and even a weekend in a Paris suburb on a linking expedition with a German band. This fitted in with our traditional work of Fetes, Old Peoples Homes, Caroling, Firework displays and Concerts.

The Band has had its usual ups and downs – poor attendance at rehearsals and engagements and conductors coming and going. However, a nucleus enabled the Band to survive and at present it is probably as strong as ever.

It is quite remarkable that this small organisation, The Bagshot Concert Band, with no firm base, largely self funding and with a regular turnover of most of its members every 10 years or so has survived for more than 100 years. Compared to the original 40,000 bands in 1900, there are probably now less than 2,000 and many of these will have been created since then. We can now claim to have played in three centuries. 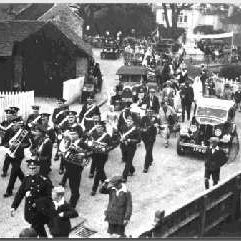